Narada Michael Walden – “We need to stand up for each other. And make a change. I thought we made more progress. And here we are trying to come back together again. Hey, let’s not forget we love each other. We need each other. And if we don’t, this whole thing will fall apart again.” Interview, January 20, 2017

Harry Belafonte – “We need our artists. They are the truth seekers.” Interview, January 20, 2016 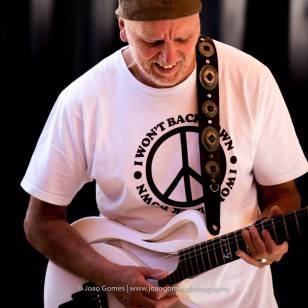 At 4am this morning, I heard an electric blast from the sky. Thunder ripped and then a streak of lighting bolted through the pouring rain. The last time I heard such a blast was when Jose Neto, a founding member of Fourth World with songs “Burning Money” and “Seventh Wave” ripped on his electric white guitar. It woke me up to the living. Imagine.

Ronaldo and I will work toward finalizing the film The Man Behind The White Guitar this next week. It’s been a two year passion project and we’re almost there. We plan to share big.

Listen to music and begin to dance.

Then, be a rebel and be kind, generous and serve one another instead of your own self interest.  This makes you a rebel in
American society today.

We’ll all be dancing angels. 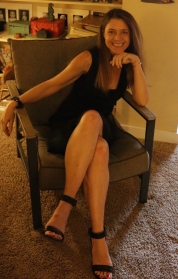 So, I’ve always had this little problem. It used to get me into trouble a lot when I was young. It might have started when I was six and hopped over a chain link fence that said “Do Not Enter” to play with my pollywogs in the ditch below. Then there was the one time I snuck out of my bedroom window to gather with teenage friends in the middle of the night. We’d head into a local train tunnel, hold fast to the wall and wait for a train to roar by as we screamed our heads off feeling the rush and power.  Or, there were the other times in high school when I got so bored learning information I knew would prove useless in my life that I began to forge parent letters and convince my other high school friends to pack up in my car and head to the beach. Yep, that was me. I do not recommend this subversive behavior. And, how I got through those years, I’ll never know. And why my parents put up with me, that’s another story.

I still have that rebel spirit, but as an adult I’m getting smarter and understanding how to have more fun with it without compromising integrity. The values of honesty and justice ensure your spirit soars  . . . because these values demonstrate how human we are and not just mechanical computers or fragile porcelain sitting pretty on mantels. At this point,  I don’t know about you, but the values I see roaring like a train through our country right now make me want to scream my head off. And, no, I don’t want to climb any fences or think about forging letters even if my buttons are getting pushed and I feel I’m about to crack.

I do like to listen to Jimmy Carter’s Crisis of Confidence Speech of 1979 for inspiration.

Nobody listened to him then but that speech should be screaming at us today. President Jimmy Carter should be honored with the highest level prize a person could get.  .  . What? Right, he did already. Nobel Peace Prize 2002. So, why does the international community recognize and honor this American president but he’s not valued so much in our country? In fact, I bet most people would be hard pressed to think much of what he did. Why is that?

Maybe we should reflect on that speech he gave in 1979. He said “people are beginning to value more what people have than what they do.” I thought of these words while looking at our entertainment media, advertisements and television programs. I thought of this value again on November 8 when we elected a new president. We value people with money, property and looks. That’s the way it’s always been, right?

I remember watching a number of shows when I was a kid that made me think about nature. One of which was the story All Summer in A Day about a group of children living on Venus and never feeling or seeing the beauty of the sun until one day they do. Then of course, I remember the powerful Crying Native American ad   – that tear, that single tear said it all as he witnessed the pollution and traffic we had created in the modern world.  I cried my eyes out watching Born Free and I remember holding the phone begging my mom to call and donate money to the starving African organizations when TV commercials came on showing images of starving children and

There was a large passionate community of people doing great things for everyone in that time period of the 1970s. Wikipedia calls it the “Environmental Period.” In fact, a film was recently made documenting the ocean activists of that time period  Coastal Heroes  about those who fought hard for us today so we can enjoy beaches and have a better understanding of uncontrolled development and consequences of fossil fuels, as the consequences of CO2 were already understood. In fact, the History.com writes that environmentalism was so mainstream that the U.S. Forest Service’s Woodsy Owl interrupted Saturday morning cartoons to remind kids to “Give a Hoot; Don’t Pollute.”

Then at the highest government level we had President Jimmy Carter who placed solar panels on The White House and 17,000 wind turbines in the State of California. He called upon the American people to embark on an “adventure” toward sustainable and independent energy, calling it the moral equivalent of war.

So, if we had such a large movement of passionate people in the 1970s, what has happened to us for the last 35 years? The answer is more entertaining or tragic, depending on your viewpoint, than any Hollywood production could produce.

name was Ronald Reagan, the same leader who called Carter’s “moral equivalent of war” statement “MEOW.” Our country in 1981 experienced a pivotal cultural shift, aligning with conservative values and new polices ranging from labor, environmental, health and economic trickle down agendas paving the way for billionaires to rise higher than the Trump Tower and our oceans to acidify, melting polar ice caps to threaten us with rising seas and global oil warfare. Then you can add 35 years of oil wars and spills, along with Global Climate reality today and understand it all makes a story for Hollywood . . . and appropriately so since the starring role was an actor himself. The first act, symbolically so, was the day Reagan removed the solar panels off The White House and said “get those off there.” Then he fired a striking union which lead to the dismantling of many unions, the binding thread to ensure a middle class, he pushed foreign oil back into our economy full throttle, and believed with his economic plan money would trickle down from the wealth to the rest of population. Was Reagan an idealist, believing in the good of people, and that billionaires would have ethics? Or, was he simply naive? Or, worse – criminal?

The judgement by us doesn’t matter anymore. Reagan simply forgot one simple yet vital fact, money produces greed and corruption. It’s found in literature since before the days of The Decameron and the Roman Church. It stirs drama and has created reason to build international churches and temples for thousands of years. Greed is part of the Western Mind Set, not human mind set. The Ohlone Indians actually valued friendship over the collection of wealth, and hunters always gave the most prize meat to the most in need, so maybe there is hope for humanity.

Essentially we’ve been living in the shadow of the Reagan Era for 35 years and we didn’t know it. Our culture shifted so powerfully in 1981 that we haven’t been questioning our values because we couldn’t see the light, that perspective and wisdom of a previous generation that went dark and silent.

So, what happened to those die hard environmentalists of the 1970s who put their time and energy into protecting us, the future generation, against environmental peril? Simple. They burned out. And who could blame them? Our current California governor Jerry Brown was in office at the time of Carter, interestingly so. Brown was a leading advocate, along with Carter, pushing for sustainable energy and working tight with solar and wind business consultants to ensure a growing future economic viability. But, when a political train comes roaring through a tunnel, as it seemed to do with Reagan, and as we can see so clearly with Trump today, who could blame those 1970 environmentalists when a president is elected on a landslide receiving the most electoral votes for any incumbent president, as Reagan received? Environmentalist today can have compassion and should not blame the 1970 activists for giving up then as we head into Global Climate Change reality today. But, we can thank them for making us smarter, because we understand the environmental stakes are at the peak and we’ve got big work ahead of us.

California is taking a stand for environmental work as a new conservative president and cabinet members take position. “They are the most dangerous group in the history of humanity,” the leading intellectual Noam Chomsky warns us today. Global oil and anti EPA leaders are taking charge in our federal government after a new generation of people have tirelessly been building environmental efforts with green energy. We understand how a train can come roaring through and this time there will be no laughing or hugging walls.

We must stand collectively in front of that proverbial train to ensure it stops, so we can all get on a new track of living right and take heed of Carter’s 1979 speech, understanding that we must value people for what they do and how they do it for all of us.

One final note. Michael Reagan writes about his father in his book Lessons My Father Taught Me and says Reagan would say it’s important to own up to your mistakes. Could the Reagan leaders of the Reagan Museum and Library own up to Reagan’s mistakes related to his fossil fuel push, economic policies and labor agendas that have taken this country down a dark road?

This is a test to see if the power of Reagan’s idealism shines through to those who truly value his legacy. If they can come clean, perhaps Reagan’s true potential as a great leader, a human being who cared about humanity with the ability to impart those ideals to society will shine bright and forever and help us out of the darkness.

Last year The Vatican had an art exhibit at the Reagan Museum. Even Pope Francis embraces today’s environmental movement and is trying to inspire. Reagan was tight with Pope John Paul II, his strongest ally. There’s a strong disconnect, one that is so evident. 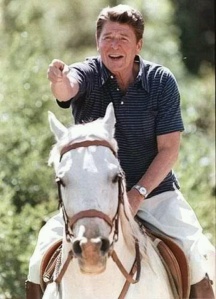 I could use a hero. I’d love to see Ronald Reagan come riding in on a proverbial horse with cowboy hat and lasso and say “Whoa, I made some big mistakes. I am so sorry.” And make his namesake, “The Hero of the Republican” true and powerful for us all.

It’d take guts, a sign of a true leader.

And it’d be a class act, a perfect ending to any Hollywood production.