The Swiss made film, “A Road Not Taken.” A powerful historic look at President Carter’s visionary green energy policies.

The film showcased locally three years ago with College of Marin in honor of Carter’s 93rd birthday and the inaugural California celebrations of the Jimmy Carter Jamboree, celebrating a living legend and whistleblowing the greatest forty year propaganda act ever delivered to US Citizens. http://www.jimmycarterjamboree.org

Carter’s historic green energy efforts have nearly been wiped out in US history books, by the corporate media and even by modern day environmentalists who refuse to acknowledge a president who urged the people to stand up to OPEC and big foreign oil and to adopt aggressive energy conservation habits. His solar panels on the White House were symbolic of his efforts and California (under Governor Brown, at the time) was leading the world toward solar and wind clean energy. 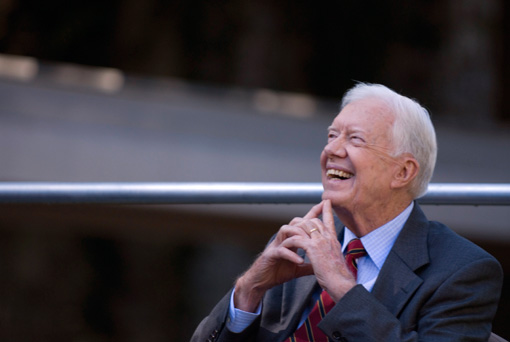 We do know that Reagan, the “Hero” of the Republican Party took down the solar panels. And by the looks of it, we’ve endured 40 years of the greatest political propaganda act driven by politicians, corporate media, educational institutions, including text book history writers, to conceal the most important environmental and political history of our time – when we had a president who tried to stop greenhouse gasses, big oil and our current global ecological disaster. It’s time for America to come clean.

Carter is more than a peanut farmer. He is the leading visionary of our time and The Father of the Solar Age.

Barbara McVeigh will introduce the film. Barbara is host of People’s Environmental News on Marin TV. She also wrote a memoir “Redemption, How Ronald Reagan Nearly Ruined My Life” about being the daughter of a union member in the 1981 national strike of air traffic controllers as they stood up to Reagan, risking everything, for political honesty. She was 13 years old waiting for the FBI to come arrest her father. She wants Reagan to be held accountable for the ecological disaster we are facing today, and ensure Carter is recognized properly as the Father of the Solar Age, as he tried to mitigate climate change 40 years ago. . . “Reagan has nearly ruined ALL of our lives with his big business and big oil policies post the visionary President Jimmy Carter!” Barbara says. “Our history books are backwards!”

The filmmakers of A Road Not Taken, Roman Keller and Christina Hemauer, presented the film in Marin County, along with Michael Stocker of Ocean Conservation Research in the year 2017 in honor of Carter’s 93rd birthday. You can see the talk here. This film has been unable to find distribution for over 12 years. It’s been given to the Redford Center and the events of the last three years have been shared with nearly every top level journalist, comedian, environmentalist . . . and NOBODY wants to talk about it.