A huge thank you for your support these last two years. It’s been a ride and the ride is just beginning. I finished my graduate work at Dominican University of California and will receive my Masters of Arts and Humanities at the end of the year. Because my final project is political, I’ve opted to finish my final paper in December in order to use this upcoming election as fodder for my project.

As the daughter of a “federal criminal” under Ronald Reagan, I have a few bold statements to make about energy policies set under Reagan after the Carter Administration (see Crisis of Confidence Speech – 1979) that have resulted in the acidification of our oceans and global climate change. We had been on a good track under Carter with the newly established Energy Department, solar panels on the White House and 17,000 wind turbines in the state of California. We were on our way to independent, sustainable energy. Today, The Republican Party and big business, primarily OPEC, need to come clean with the propaganda they used for that pivotal election between Carter and Reagan and the fossil fuel legacy that have polluted our children’s world, in the name of money.

The biggest lesson of my life started when I was 13 years old in 1981 when my father, a union man, striked against Ronald Reagan in what has been called the second greatest labor event in American history – stand for truth and honesty, even if it hurts. That strike had nothing to do with money, as the media, influenced by OPEC, portrayed it. Instead, it was about integrity and being your word.  No university degree or money could ever give me what my father gave me – and that is it takes guts to do what is right in this world. Stand by it, because there is nothing else in life worth more than those principles, even in the face of losing everything. Truth always reigns. Thank you, Dad.

We have a generation of children coming into this world facing climate change, melting polar icecaps and acidification of oceans. They are angry and one day they will be asking us adults big questions. “Which side – which side are you on?” Jackson Brown sings in his song. If there was ever a time in the history of humankind to take a stand, unify, get creative and make change for the positive, it is now.

A little picture to share with you all. Thanks, again, for all your support. I’ll be sharing a message in about three weeks and I hope you’ll support me.

My two children have been troopers these past two years. My son tells me he now has a new Halloween costume, so I’m happy my gown and hat will continue to serve with meaning and purpose! 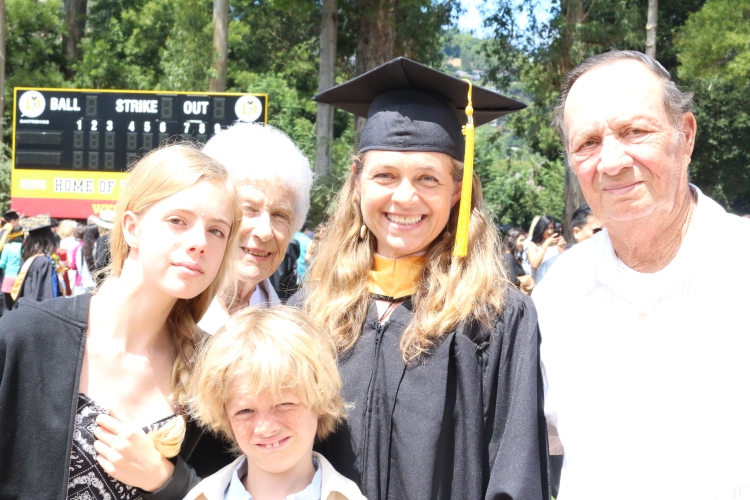